The Association of Industrial Automation of Ukraine was one of the first among the UCA clusters to show an example of internationalization by joining the American CSIA association. The history of these relations’ development has many features specific to high-tech industries. But first of all, this is a story about professional solidarity between the communities of the Euro-Atlantic bloc and Ukraine during the war.

At the end of February, Oleksandr Yurchak, CEO at APPAU, appealed to his international contacts regarding mobilization and possible assistance to Ukraine. One of the first to respond was Luigi de Bernandini from Italy, former CSIA vice president and CEO at Autoware. Control System Integrator Association (CSIA) is the leading global association of industrial automation system integrators. The association is based in the USA and, therefore, is more focused on the US and Canadian markets. At the same time, the association’s members include integrators from almost all developed countries, and CSIA’s plans have long ago included spread of professional standards outside the United States. APPAU has been in contact with CSIA since 2013, when we attended a conference in the USA and started promoting CSIA professional standards among Ukrainian control system integrators.

Therefore, in early March, Mr. de Bernandini offered his help in contacts with CSIA management – it was necessary to clarify the situation and understand which assistance options are most suitable for APPAU. Among them, such as employment of women in the EU, assistance to refugees, professional assistance for industries in Ukraine, possibilities of outsourcing Ukrainian integrators services, etc. were considered.

After several online meetings with CSIA CEO Jose Rivera, it was decided to hold a broad presentation of APPAU and our members to CSIA. Such an online meeting was held on April 13 – six leading integrators of APPAU held speech. We also demonstrated at the meeting the 1st version of the free resource database of APPAU integrators for outsourcing. 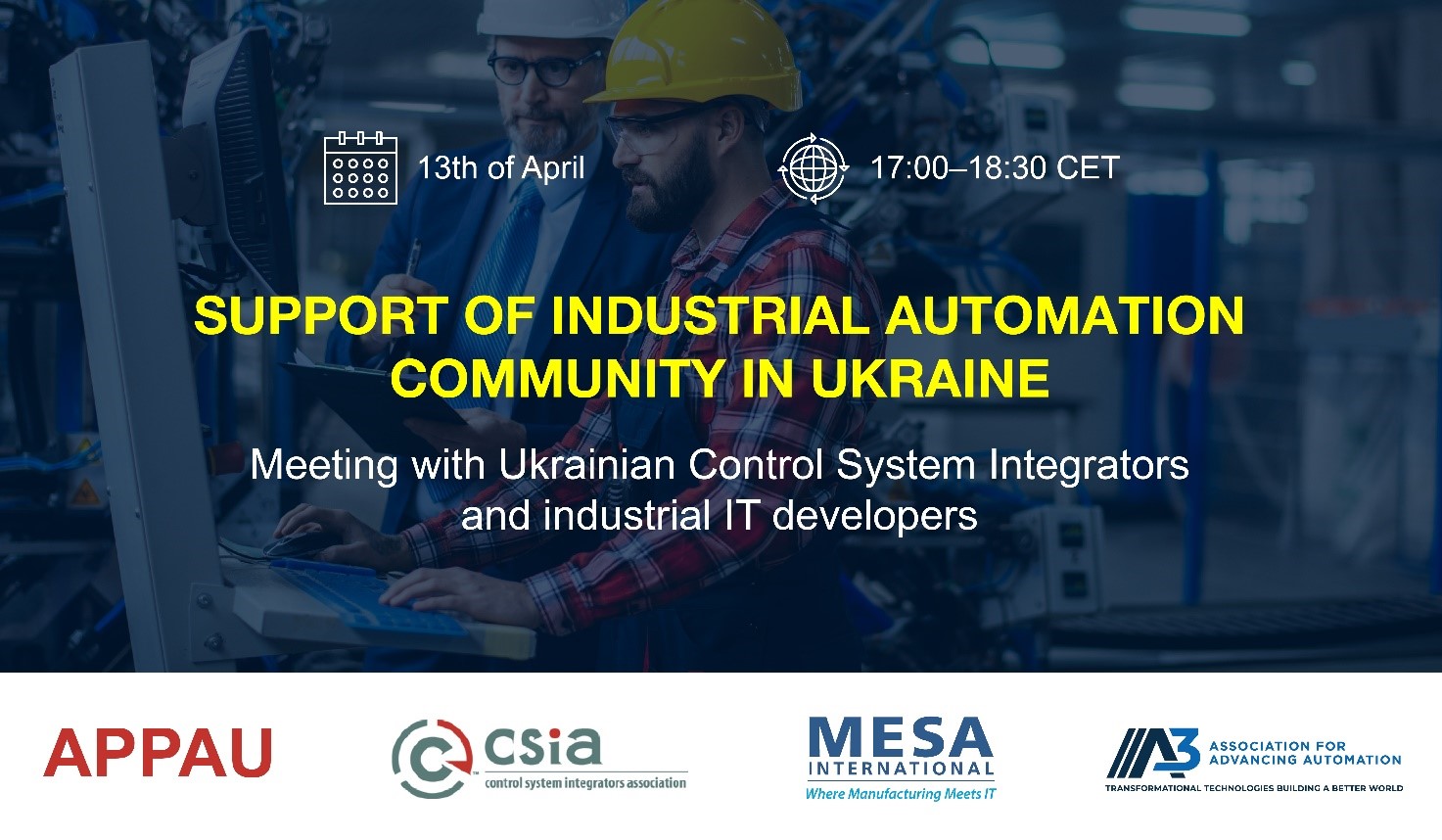 This presentation played a positive role – on April 19, CSIA Board of Directors decided to provide free membership for APPAU integrators until 2023. The Board of Directors also supported Luigi de Bernandini’s initiative of 1H4U (1 hour for Ukraine), which provided for collection of funds by accounting for 1 additional hour of CSIA members employees’ work, with subsequent transfer to APPAU. See full CSIA announcement.

In May, the first 7 integrators, members of APPAU (IT-Enterprise, TeraWatt Group, SoftElegance, System Automation Service LTD, Techinservice, Infocom Ltd. and С-engineering), the executive directorate, and the “KPI” 4.0 Center will pass the procedure of joining CSIA.

To understand the significance and prospects of APPAU accession to CSIA, it is worth delving a little deeper into the context of this industry. By the way, industrial automation, as a branch, in the economic segmentation of economic sectors does not exist in Ukraine. In the USA, the situation looks different – CSIA calls its field of activity precisely ‘Industry’. CSIA lobbies and promotes professional standards of system integration in the US and global market, as one of the key areas, thanks to which industrial customers can meet the increasingly high requirements for productivity, quality, flexibility and economic efficiency of production. These requirements are met precisely due to system integrators, key actors in automation of production. Simply put, modern industries cannot be competitive without modern automation, and system integrators carry this automation as a part of engineering services. And that is why they should be given proper attention.

APPAU is in some ways the Ukrainian analogue of CSIA – only much smaller and younger. CSIA unites more than 500 integrators of the USA and the world, while in APPAU, about half of 50 members are integrators, and in total there are no more than 100-120 of them in the Ukrainian market.

At the same time, Ukrainian integrators are practically unknown on world markets. Of course, some of our integrators, such as “Infocom Ltd” or “S-engineering”, have been working in foreign markets for a long time, and such as “Techinservice” build even modern factories turn key. But unlike the IT sector, Ukrainian industrial automation community has neither consolidated, strong positions, nor any stable and clear image in the international arena. APPAU’s attempts to launch such export initiatives in 2016 and later in 2018-19 failed due to lack of funding. Despite numerous appeals to donors and the State structures, the direction of export/internationalization of industrial hi-tech was of little interest, and it was always inferior in popularity to the Agro and IT segments.

In this context, it is clear why joining the CSIA is of such great importance for APPAU. Suddenly we became known the world’s largest association. Suddenly, leading industry media (Control Engineering) started writing about us. Suddenly there was a demand for our database of system integration outsourcing services. There were requests for other types of services, in particular, designers.

Of course, our integrators began to respond to these proposals. In particular, the most proactive ones, such as “TeraWatt Group”, immediately included mechanisms of direct networking and contacts – their management attended the annual CSIA conference in the USA in late June. Prior to that, Ukrainian integrators had never attended similar international conferences on system integration.

In other words, the war brought us not only decline of domestic markets, personnel losses, relocation problems, loss of key customers in the east, etc. It also opened up new opportunities for internationalization, and judging by the first results, this perspective can become a turning point in the development of domestic system integrators.

“A friend in need is a friend indeed” – this statement is absolutely the same today for business partners. Despite large number of different international and European organizations and a good dozen international vendors in our community, with whom APPAU has been partnering for many years, the first real and significant help for the association and our members came from CSIA. And the leader of this support was the Italian “Autoware” and its CEO Luigi de Bernandini. In fact, in addition to actively recommending the CSIA community and helping us get closer to leadership, Luigi provided us with 2 other extremely valuable services:

The first financial income was received from “Autoware”, and this greatly supported the management of APPAU. No less important is the moral and psychological support that our executive directorate constantly feels from Mr. de Bernandini.

Another partner of ours appears in the development of our relations with CSIA, the late Volodymyr Morenko, former CEO at “Insist Avtomatika” from Omsk, Russian Federation. Mr. Morenko supervised and provided comprehensive support to APPAU in contacts with CSIA since 2013, for his firm was the only system integrator in the post-Soviet space certified according to CSIA standards since 2001. In recent years, Volodymyr lived in the USA and was an active supporter of spreading the best practices of CSIA in the post-Soviet countries. Volodymyr Morenko had Ukrainian roots, he was very worried about the events of the war beginning and his heart could not stand it – he died on February 27. Volodymyr was well-known in CSIA management, a close colleagues of Luigi de Bernandini, and this loss is another echo of our war in the CSIA professional community. And this is another, emotional and historical connection that unites us with CSIA, and paradoxically through our colleague from the Russian Federation.

In this story, you can see several symbolic things, but first of all, it is about real human and professional values that have no borders. We believe it is a deep sense of importance of these values that has motivated Luigi de Bernandini to continue supporting our community.

All actions within the framework of this support were ultimately united by the common slogan “Professionals4Ukraine”, which is jointly supported and promoted by “Autoware” from CSIA and APPAU. In essence, this is a call to professionals from different countries and different industries to support Ukrainian professional communities and their members during the war.

The executive directorate of APPAU expresses deep gratitude to Luigi de Bernandini, Jose Rivera, other heads of CSIA system integrators, as well as to all participants of the 1H4U initiative who support us these days.

The first lessons of cooperation

Thus, today you can summarize the first results and lessons of joining CSIA:

Accordingly, our executive board, having foreign partners’ support, and on the other hand – its members, will continue to active actions in the direction of further internationalization. In the coming months, we plan to significantly deepen and expand the areas of work on international markets. Our plans include further deepening and development of relations with CSIA, development of similar relations with European associations (Orgalim), participation in exhibitions and forums in the EU in autumn (negotiations with partners from the Czech Republic are ongoing), as well as a whole series of activities in the direction of integration into the EU innovation space. For more details, see fresh UCA strategy “Export-Internationalization of industrial and hi-tech SMEs”.

We call on members of our community to increase efforts and activities for internationalization, and to stand in solidarity in joint activities among themselves and with our international partners. This is the only way we can maintain our economic front today and win this war.