Joint interest of many parties interested in the 4.0 topic requires constant public coverage and clarification of this global initiative, in which many countries have already been involved. Ukraine is still behind in this trend, but there is movement. In this article we provide a historical perspective, fresh facts about the development, and also argue “why we need it” and what the challenges are. This article is dated 2016 and is constantly updated.

Essence of the trend. Difference between the “4th industrial revolution” and “Industry 4.0”

New world trends brought by modern information and communication technologies have been talked about all the time and for a long time. In the last decade, terms like Smart or Digital Factory and Digitalization (of anything and everything) have been heard. Where does the Digital Economy come from? In the USA, which are the biggest innovators in the world, they are talking about such technologies as IoT, Big data, Cloud computing, Remote & mobile access, wireless communication, 3D printing, etc. In 2013-14, we talked about it at Association of Industrial Automation of Ukraine (APPAU) events as “mega-trends” in industrial automation. Is it possible that these new digitization trends are 4.0 trends?

The term “Industry 4.0” appears to us after visiting Hanover in 2014, and this article comprehensively explains the German government initiative on high-tech strategies until 2020. In short, it is a coordinated state initiative to mobilize all national resources in order to accelerate technological changes and maintenance of German leadership in world competition. Let’s repeat that the term refers specifically to technologies in production, that is, to industrial sectors. Today, the Industrie 4.0 platform unites several thousand companies around directions of research, innovation, training, etc. in the field of production technologies. Maybe then we are talking about more powerful communities or state initiatives?

In fact, digitization as a penetration of digital technologies, automation and IT into all levels of life and economy began in the last century and was called the 3.0 technological order. And it continues to this day. But what Germans and Americans have brought in recent years is a certain rethinking of how companies do business. Horizontal and vertical integration of IT, combination of different technologies, creation of new cyber systems and artificial intelligence is changing business models and ways of doing business. It is interesting to observe how rankings of the world’s companies migrate – in 2015, in the ten richest, we see complete dominance of software and service companies – and not those that produce oil, gas or metal. Although this was the case a few years ago.

That is why and to distinguish this phenomenon of changing business models thanks to technologies, the name “the 4th industrial revolution” appeared. And since these technologies are used everywhere, over time the term becomes more generalized and goes beyond industry – it began to include areas of urban infrastructure (Smart City), education, healthcare, etc. Others have also been added to the range of technologies – nanotech, bio, 3D printing and new energy efficient technologies.

Thus, the world began to call this change the “4th industrial revolution”, implying that the same technologies generate changes everywhere and these changes generate a new stage of social development, significantly different from the previous stages. And here a certain linguistic confusion arose. In our perception, “industrial” is more about industrial production, although “industry” in translation can also mean “sector” – that is, any. This is what gave rise to different interpretations and disputes in Ukrainian business circles, which we wrote about previously.

So, in order not to get confused in terms, we suggest to distinguish: “4th industrial revolution” refers to all spheres of life, where new technologies penetrate. But Industry 4.0 is precisely about new technologies and production models in industry, and where platforms such as German or similar are most often meant. The common denominator of both categories is 4 key areas of revolutionary change: IoT, Data Driven Decision (Big data analytics), Connected machines, Artificial Intelligence.

Perhaps such an interpretation will dilute a little and reconcile us with IT scholars and business schools, which in advance began to use the term “4th industrial revolution” without even mentioning the industry itself.

What it all is for – benefits

Klaus Schwab, founder and chairman of the World Economic Forum, in 2016 published an article entitled “The 4th Industrial Revolution – What it means and how to respond”. In it, he talks about advantages of mass digitalization, as well as about new challenges. Let’s briefly quote the advantages in the understanding of Klaus Schwab and why they are not a continuation of the “3rd industrial revolution”:

Together, this will contribute to growth of global wealth and reduction of inequality between developed countries and others.

In APPAU, regarding industry, in 2016 more prosaic and down-to-earth benefits of new technologies were identified as follows:

1. Lowering cost and speeding up integration – horizontal and vertical. This is exactly what is lacking today for full control and improvement of Ukrainian enterprises’ efficiency. And this is a big problem, because most of data is entered manually into ERP-type management systems or they are simply not accurate and complete. Accordingly, many production KPIs, especially in real-time are simply misleading. Solutions through traditional MES and similar systems are a very expensive path that will take years. Introduction of new technologies, but based on already well-recommended standards, can significantly speed up implementation of this task.

2. Replacement of traditional server technologies with cloud ones also cheapen management system solutions and maintenance. Accordingly, we can really expand the field of SaaS services.

3. For integrators and vendors, new trends also mean creation and development of new niche segments and corresponding solutions. As one of the recent examples – see solutions of INFOCOM Ltd in the field of unmanned control. Also, a new segment that is expected to grow significantly is data analytics. According to McKinsey, industry has the most data, but today only 5% of it is used to make management decisions. We see similar examples everywhere in Ukrainian industry.

4. Significant growth of certain traditional segments – for example, everything related to basic automation must be smart. Other experts and sources clearly indicate how industrial digitization will take place – precisely through mass introduction of smart devices. Together with para. 3 this results in a multiple increase of APCS market total volume, which today complains of stagnation and drop in volumes.

5. Acceleration of APCS market participants development: today we openly talk about our vendors’ and integrators’ conservatism (and, accordingly, also our customers’). 4.0 trends, convergence and healthy competition with IT will give a powerful boost to our market and this is actually long overdue. At the same time, we clearly focus on the key difference between IIoT trends (where IT already dominates) and Industry 4.0 (advantage will remain for APCS), fig. 2.

6. As a continuation of the previous para., it will bring new more competitive players to the arena, as well as contribute to development of export potential and domestic manufacturers. There are more examples like Luxoft Energy, which is already creating ACS for dispatching and managing electricity for the world’s biggest brands and customers, and that’s a good thing. Developers from Luxoft are head and shoulders ahead of our “classic” industrial integrators, as they own and use new technologies, and also know international standards.

7. These trends will also definitely accelerate reforming education system: just as businesses consider IT as a role model in the field of agile, so our universities and providers of educational services understand that it is necessary to refocus on online and interactive education.

At the same time, new trends bring new challenges. Klaus Schwab in his article writes about the following:

There are other threats, but overall, Klaus Schwab notes that speed and benefits of innovation brought about by the 4th industrial revolution, speed of growing gaps and negative phenomena associated with it, are difficult to predict and fully understand. One thing is clear – those will win who consciously approach this and plan the necessary changes at the level of industries, state and nation.

Does Ukraine plan these changes?

Many countries of the world have already started their journey in the 4th industrial age. Platforms similar to Germany’s Industrie 4.0 exist in various countries. The USA has been developing Digital direction in all spheres for a long time, albeit with less state intervention. In industrial automation, their Industrial IoT (IIoT) initiative has long ago united dozens of well-known brands in a consortium with the same name. And today they have united with the Industrie 4.0 platform. France launched The Industry of the Future initiative – and, like the Germans, also at the state level. It includes 34 initiatives aimed at various spheres of the country’s economy. India and China have their own powerful initiatives. Large conferences devoted to the 4th industrial revolution are taking place all over Eastern Europe. Other neighbors, such as Turkey, have been holding conference dedicated to the supply chain topic under this banner for 3 years in a row, and are also attracting investors to their technology parks as part of the European Factory of the Future initiative. Even on the World Economic Forum website, a number of articles are devoted to Africa, some with loud statements that “Africa must become a hub of the 4th industrial revolution.” At the same time, the authors mean that demand, economic and social problems can be solved much faster today – for example, vaccination problems are already solved with help of drones, mobile communication helps in other health care tasks, transmitting necessary data about patients in a timely manner. But the main thing is that Africa has the greatest growth potential and in 2050 it will be the youngest continent in the world.

Ukraine is still in the process of determining. In 2018, the country created National Strategy for Industry 4.0, but so far it has not been adopted by the government and is being implemented by the business community, which is coordinated by the APPAU association and the Industry4Urkaine platform.

It is also important to understand that in the context of 4.0 we are talking about a set of factors that drive modern production. Today we are talking not only about different taxation or conditions for attracting investments, not only about techno-parks, but also about completely different things related to culture of innovation, development and cooperation – and all this is unlikely the parliamentarians’ concern.

Since 2016, when this article was first written, the national Industry 4.0 movement has come a long way.

In July 2016, strategic agreement was reached between the IT and APCS sectors on the Industry 4.0 Charter provisions. This is how the national Industry 4.0 movement was born.

In 2017, a separate “Industry 4.0 in Ukraine” site was launched; the first competition of innovators and the first export events were held in Berlin.

In 2018, the national Industry 4.0 strategy was developed. 14 projects are grouped into 6 areas of action and APPAU has taken responsibility for their implementation. Since then, traffic monitoring has been in accordance with the plans of this strategy. 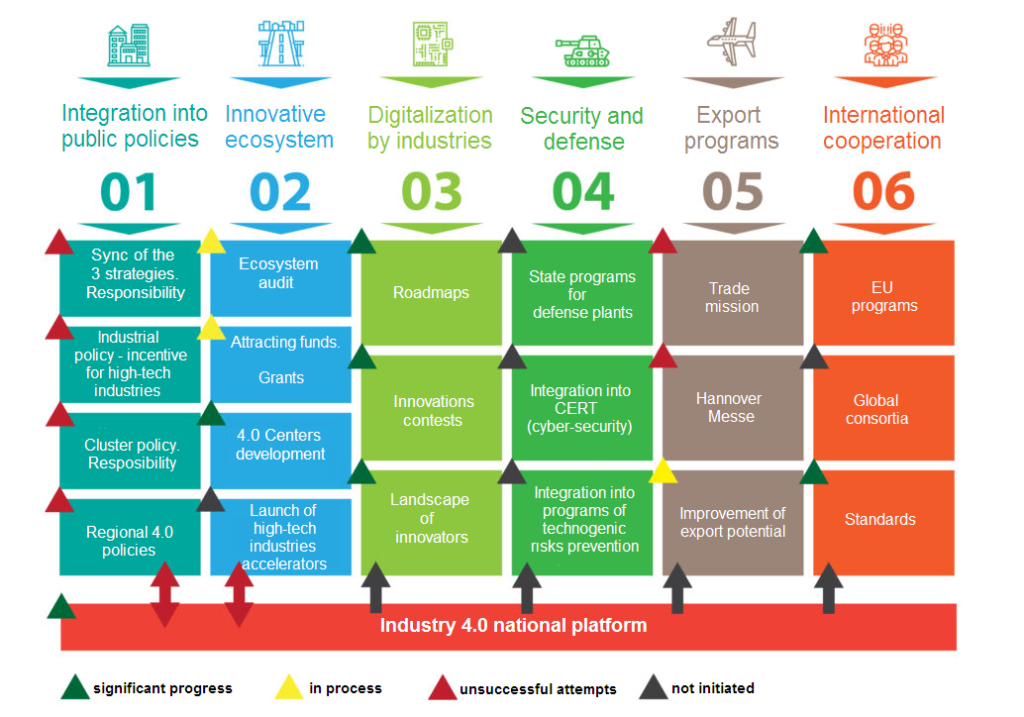 You can see the results of 2019 in this publication.

In 2020, APPAU focuses on integration into state policies – a number of projects are being developed in regions in areas of “Engineering-Automation-Mechanical Engineering” clusters and smart specialization.

The main challenge of the communities in 2021 remained the same as in 2016 – a much better consolidation of various Industry 4.0 sectors and stakeholders is needed in order to bring this strategy to the state level.